The Rocky Mountain Pinzgauers participated the USFS Greeter program at Left Hand Canyon. This was implemented to educate the users of Left Hand Canyon in Tread Lightly issues. The plan was developed by members of the Colorado Association of 4 Wheel Drive Clubs Inc and several of it’s member clubs to show the Forest Service that education plays a key role in the use of our public lands. Club members worked half day shifts “Greeting” users of the Left Hand Canyon Area; this included not only 4 wheelers, but also target shooters, hikers and ATVs/motorcycles. The shooter were instructed to pick up their shells and not bring large targets like TVs and refrigerators (which had been done in the past), off road users were instructed to stay on the established trails. The Forest Service was impressed with the program and noted a decrease in off trail activities and a reduction in litter. The program was suspended and may be used again at Left Hand or on some other trail as deemed necessary.

On March 27th, 2004 Chuck Mackey, I-Da and Yu-Ching Fan and Paul Buckner participated in the prep work for what would be the Left Hand Canyon Meadow (formerly the playground) Restoration Project.  We were joined by Brian and Melody of the US Forest Service.

We made several runs, and hand-collected about 5 tons of rock from along FR 286, loaded it, hauled it, and stack it at the restoration site.  The rock was subsequently used to construct water diversion structures, which will go a long way to slow erosion in the restored meadow. The Pinzi’s performed great with a load in them, as expected. On one of the downhill trips Chuck put Melody behind the wheel of his Pinz. She did a great job driving and the smile on her face said it all. Both Brian and Melody were impressed with the capabilities of our trucks.

April 16th, 2004 Friday– We were asked to help the Wildlands Restoration Volunteers , with the logistics of getting all the material from the roadside up to the restoration site for the Saturday project. So we take Friday off to haul materials. Up at the entrance to FS286, once again, Chuck, Paul,  I-Da and Yu-Ching, met with members of the Bighorn 4x4 Club and Toyota Tacoma Clubs and it was great to meet and work side by side with them. We transported more than 22,000 pounds of restoration materials (including hay bales, mulch, fertilizer, native seed, erosion netting, plastic pipe and tarps) up to the meadow. There were Americorps volunteers to help load/unload. The last run of the day was performed my Chuck who loaded up the WRV tools from the shed in Gunbarrel. His Pinz was packed, shovels, wheelbarrows… He then spent the night at the site, for those who don’t know, Left Hand has a reputation for theft of anything that’s not nailed down!

April 17th, 2004 – Chuck spent most of the day hauling more rock, and members of the Trail Ridge Runners were there to help. There were many “higher up” USFS people and it gave us a chance to show that the off-road community can give something back and even the environmentalists were thankful for the help provided by our trucks and those of the other clubs. After the planting was finished, the WRV provided snacks, beer and even a Bluegrass band!

Each year the Rocky Mountain Pinzgauers participate in the Annual 4th of July parade in Heritage Village. As usual, the event gives us a chance to show our vehicles to the general public and answer many questions. Several member go to great lengths to patriotically decorate their Pinzi’s! It’s a fun event for members and Heritage Village residents as well. They get a chance to ride in our vehicles and everyone enjoys lunch and refreshments afterwards.

The Rocky Mountain Pinzgauers have participated annually in Rocky Mountain EAA Regional Fly-In’s. The planning for the involvement in this event began months before with the planning meetings, explaining to the air show organizers the many tasks that our trucks can do.

Pre-show work began hauling supplies such as snow fence and tents from storage to the air show site. On the days of the air show our trucks performed duties such as towing of aircraft, dispensing smoke oil to the aerobatic performers, hauling the event programs to distribution points, distributing welcome packets to the pilots participating in the fly-in, transportation of Civil Air Patrol Cadets and air show volunteers to their various assignments and re-supply of food vendors.

We operated out of an “on call” motor pool in front of the volunteer staging area which gave us a rapid response time in fulfilling requests. 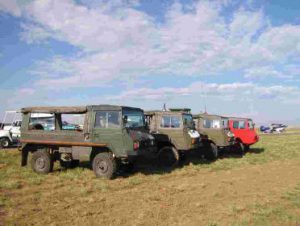 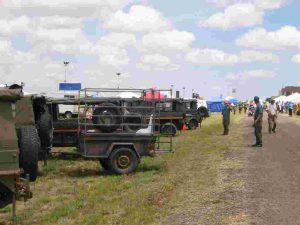 The RMP participates annually in the Christmas Caravan for Kids event. Members from various Front Range 4x4 Clubs bring one unwrapped new toy and assemble at 3 area Malls then “Caravan” to present the toys to the Marine Corps Toys for Tots program.